[The following account came in from the United Kingdom, and the writer requested anonymity.]
I saw a shadow person. I’m not a paranormal type person. I’m a walker/hiker. One path I used to take led me past a crematorium (I didn’t know it was there for a long time). I was about 100 yards from the crematorium and saw it ahead of me on the path. It was too far away to be my shadow (I could see that, too). I hadn’t been walking in a while through commitments, and I got really angry that this thing would spoil my walk, and so I walked faster towards it. It looked straight at me and ran, went behind a bush and disappeared. 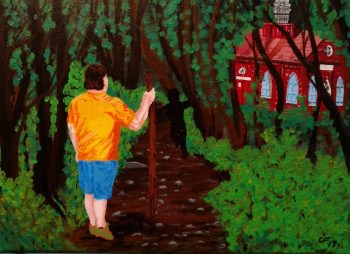 That was the first time I saw the Shadow Person in that area. The trail is unusually dour and I couldn’t find a natural reason for it. I noticed the feeling from the first time I walked down it.  I wasn’t surprised when I saw the Shadow Person. There’s the crematorium at one end of the trail and a mental health unit at the other, and I know negative ‘‘entities’’ like messing with those people.

I used to wonder why I always got terrible luck after I walked that way and why hardly anyone else took that path. Now I know.

REG: What sort of bad luck happened to you, and how long did it last?

Anonymous: The bad luck would happen for between a week and a fortnight and would make me into a ‘‘white crow’’ for every moron that was in whatever area I was in. It was like someone had written ‘‘mess with me’’ in invisible ink on my forehead and only cretins could see it. People would take just about anything I said negatively in those times, too. It got quite ugly. There was a person with a personality disorder (I worked in mental health) who’d latched onto the peripherals of my social circle, and they sensed it straight away.

I don’t go there anymore! Take care and be careful if you’re actually going looking for these things.

REG: Shadow People are attracted to areas of depressed and low energy, such as might be found in burial places where people do a great deal of grieving. There is also the possibility of lingering earthbound soul energy. Even casual visitors, such as hikers, might feel a sadness as they enter the area, and thus contribute to the pooled energy. A mental health facility, where people suffer from various disorders including chronic depression, also can attract Shadow People.

Encounters with Shadow People are associated with runs of bad luck, as well as eruptions of poltergeist phenomena at home. This association also exists with related entities such as Men and Women in Black, Black-Eyed Kids and People, “dark” but unknown beings and creatures, and even some extraterrestrials. Does some of their negativity just rub off on witnesses – or is there a deliberate attempt to taint a person? Some individuals who encounter these entities have a feeling that the attempt to pollute is deliberate. This is especially the case with the Black-Eyed beings.