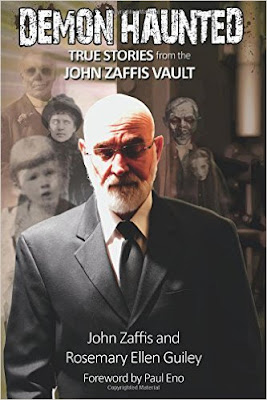 “Mirror Head sat glittering and brooding in the window of a second hand antiques and odd finds shop, waiting for a new owner.  Or victim.  It was one and the same.

Mirror Head was made of a severed mannequin’s bald head, and took its name from its skin of mirror shards.  Dozens of sharp irregular pieces of mirror were glued in a mosaic over the front of its head.”

Thus begins the story of “Mirror Head,” the opening tale in the new book Demon Haunted.  As we quickly learn, Mirror Head turns out to be quite haunted and leads to a series of problems for the unlucky couple that takes the object home.  Fortunately for them, they eventually found the Haunted Collector himself, John Zaffis.

John recently sent me a copy of his new book, co-written with Rosemary Ellen Guiley and it’s certainly an enjoyable read.

The creepy story of Mirror Head is a great start and many more strange tales follow.  Zaffis has become known for both his museum of haunted objects, and his willingness to haul away cursed items that unlucky people don’t know how to deal with.  His years in the field and the countless items he’s gathered have come with some incredible stories and in Demon Haunted, he shares a number of them.

Spirits and entities can attach to the most exotic of objects, or the most common of items.  In Demon Haunted we learn about some of the more interesting stories connected to items that John has retrieved.  There’s the walking stick that drains energy, strange containers connected to magical practices, demons and djinn, and even a number of religious statues and items, which, yes, can indeed become cursed or filled with negative energy.

As if sharing such stories wasn’t enough, Zaffis has included a very personal chapter to end the book.  Titled “Messages from Ed Warren,” the chapter details communications from the spirit world to John and others, that have seemingly come from his uncle, Ed Warren.

Ed Warren is an iconic figure in the world of paranormal investigation, being at the forefront of numerous cases during his career.  He passed away in 2006 at age seventy-nine.  John himself suffered a heart attack in the spring of 2015.  It was after this brush with death, that messages from Ed began to come.  The early communications came via a medium in Georgia who passed the information along to John.  But Ed has been persistent.  His voice has come across ITC devices commonly known as “ghost boxes” or “spirit boxes,” in an ever widening circle.

I have my own personal connection to these incidents.  In late spring of 2015, I began to receive communication from an “Ed” on various ghost boxes at multiple locations.  The messages were constant and pressing and I was consistently told that it was Ed Warren speaking.

I’d met the Warrens in the late 1970s during the early days of my interest in all things supernatural.  Not living in the northeast, I was unable to spend extensive time with them, but as early “paranormal celebrities” they were certainly an influence on anyone with an interest in the field in those days.

When messages from Ed started coming to me during investigations, I had no idea what had unfolded with John.  It was only later, during a conversation with Rosemary that I mentioned the series of strange communications and learned about the extent of Ed’s communications.  Oddly, during an ITC session at the Mystic Inn in CT, a group of people that included John received messages from Ed where the name David was mentioned.  Was a further connection being made?

The mystery of the messages from Ed is still unfolding, leaving us all to wonder what exactly is so important that he comes through to multiple people in the field.  Hopefully, as more information is gathered, we will all understand what is so important.  In the meantime, John and the rest of us continue to listen.

As for Demon Haunted, Zaffis and Guiley have given us an excellent read and I thoroughly enjoyed it.  Pick it up on Amazon for a compelling series of stories from John’s long career.