An interesting entity contact case surfaced in rural Western Washington State. The experiencer, whom I shall call “Ben” to keep his identity private, provided an account to Lon Strickler’s Phantoms & Monsters blog, published on March 22, 2017. This is a followup with additional information and discussion of explanations.

Since 2010, Ben has lived in a house in a remote, rural area in Western Washington State. For privacy reasons, the exact location is withheld. The house sits on 3.74 acres, and is on sloping land. At the top of the hill is a trail; the house sits in the middle; and at the bottom are a creek and swampy areas where “all the weirdness happens,” Ben said. They are not far from salt water.

The house was previously occupied by drug users, who left the rooms covered with graffiti of swastikas, pentagrams, a four-foot spider web, and “Rest in Peace Mom.” There were holes in the walls and spent cases of ammunition littering the floor. Ben said there has been no paranormal activity in the house, which has been repaired and renovated.

The area has had a long history of sightings of humanoid and Sasquatch-like forms. “Everybody out here, if they say they haven’t seen something in the woods, they’re lying,” he said. “There’s all kinds of weirdness.”

Ben is a native of the area and was in high school when he had his first sighting of a mystery figure. He and a friend saw a humanoid form about six feet three inches tall. It turned and looked and them and ran into the woods. It did not seem to be as big and hairy as other descriptions of Sasquatch, but was slighter and wiry, as though it hadn’t eaten in a while, Ben said.

Ben also once saw a dozen mystery lights in the sky on a clear night. He was wrapping up work outside and looked up, where he saw about dozen lights in a triangular formation moving slowly across the sky.

He has no particular beliefs about the paranormal or UFOs. 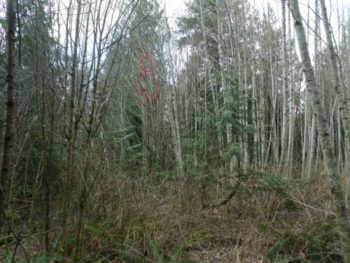 “Predator-like” shape seen in the trees.

The property has been subject to trespassing and squatting by drug addicts, some of whom are violent, and in late July of 2016, Ben armed himself with his rifle and began making patrols through the heavy woods. In early August, he was on patrol and had the sudden urge to sit down beneath a large, ancient cedar tree. He set down his rifle and daypack and relaxed, closing his eyes. He entered into a pleasant, zen-like state, feeling that everything would be okay.

After a while, he opened his eyes and glanced to his right toward an alder tree grove, and saw a humanoid shape about 15 feet up in the air. It was not solid, but looked like rippled air, similar to the cloak of invisibility portrayed by the alien entity in the Predator films. Its head, neck, and shoulders were outlined, but the rest of it fell away into nothingness.

As he stared at this shape, an overwhelming dread seized him, penetrating to the core of his being. He was deathly afraid to move in the slightest way. At last he took off his glasses, wiped them on his shirt, and put them back on. The shape was still there. 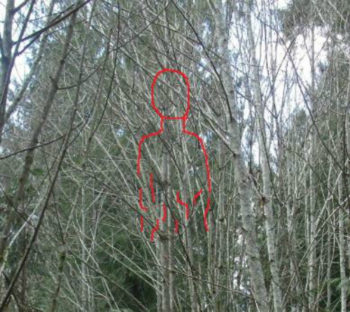 Enlargement of shape in the trees.

Ben counted down in his mind from five to zero, and at zero grabbed his belongings and dashed for home. Nothing pursued him, or showed up at the house.

He researched for an explanation. One of his friends, a Heathen, told him he had encountered a “forest wight,” a guardian type of being. He also received suggestions that he should make an offering of food to the spirit or being.

Ben avoided the area for a while, and in September 2016 returned to the spot to take photographs. He took along an offering of food and water. A feeling of dread built up in him as he approached the site, but it was not as intense as the first time. He did not see the rippled-air shape but felt its presence. When he put out the offering, he did not have any ill or bad feeling. He talked aloud, explaining that he was trying to protect the property, and nothing was allowed to follow him back home.

Around this time, Ben found a mysterious, L-shaped hole about 75 feet from the cedar tree. It was cleanly made and did not appear to have been caused by the digging of an animal. He took photos of it.

When he returned to the area again, he found two long gashes in the earth by the hole. They were about two feet long and about as wide as man’s foot, as though someone had dug his boot heel deep into the earth and dragged it. They, too, did not appear to have been made by an animal. 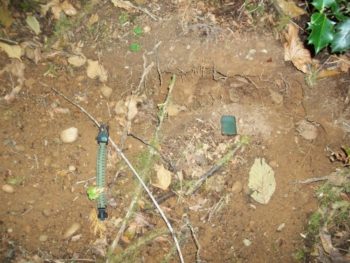 Hole in ground with bracelet and lighter for size comparison.

Ben continued his patrols of the property, and was in states of heightened awareness whenever he was near the tree and gouged earth. A rising anxiety especially occurred every time he passed the cedar tree. He put his bayonet on his rifle to discourage anything that might jump out of the bushes. He talked aloud to reassure whatever was there that he meant no harm, and it was not to follow him home. He did so even though the being or presence seemed tied to the spot, in an area he roughly estimated was about 300 feet in circumference.

In January 2017, Ben decided to return to the site to take more photographs of the gouges and hole. This time, the anxiety hit as soon as he stood on his porch with his camera in hand. The dread increased with every step, mounting to the intensity of his first experience.

He noted the temperature as he left, and recalled that it was between 55-57 degrees F. As he got closer to the hole, the temperature steadily dropped to an estimated 42-44 degrees.

Ben wasted no time snapping his photos, feeling a great urge to clear out as quickly as possible. While he was there, a strong wind arose and whipped through the site. This was strange, because the site was at the bottom of a ravine, surrounded by wind-blocking, old-growth trees. Yet, wind that felt like 30-40 miles per hour in strength—storm wind—surged around him. 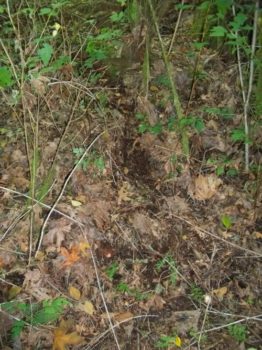 Gash in the ground

When he finished taking photographs, Ben high-tailed it home, again instructing that whatever was there did not have permission to follow him back.

The new photographs from that day were destroyed due to a mysterious file corruption. Before they were lost, Ben was able to send one to a friend in Florida. The photo showed the woods on a gray, overcast day. There were no anomalies in it, but his friend commented that just looking at it filled him with a weird feeling and an unexplained dread.

As of the end of March 2017, Ben continues to patrol the property, and plans to take additional photos. The only change that has occurred to the hole and gashes is a filling in with leaves and dirt debris. He continues to sense a presence, but has not seen the rippled-air shape since his first experience.

Ben notes that he has taken a friend to the site, but nothing unusual happened.

Ben’s experiences correlate with other documented cases of encounters with unknown beings, spirits, and presences in remote, wooded areas. Some of the phenomena he describes are common to many experiences, and other phenomena are not.

The salient characteristics here are:

There are various possible explanations, but only one that I believe to be on target.

Wights and other guardian spirits

Folklore is replete with spirits and beings who are specific to places and do not roam. Some of them are perceived as guardians of the land, protecting against interlopers, trespassers, and those who deface or damage the land. Among the beings that fall into those categories are co-walkers, striders, genii, and faeries that go by many names. The genii (singular genius) were Roman spirit guardians of places and individuals.

“Wight” is term that has become greatly altered by the fantasy fiction and live-action role-playing genres. In old English usage, it referred to a living person. In Norse mythology, “wight” refers to the Vættr, guardian spirits who are divided into clans and look after water, land, and households. Heathenism, a modern revival of Germanic paganism that has many offshoots, is oriented around Norse and Germanic mythologies, so a “forest wight” interpretation by Ben’s Heathen friend fits this viewpoint.

In fiction, “wight” has become a term for the undead, marauding corpses, vampires, and monstrous beings.

Guardian spirits are known to act out in hostile ways against humans. The faeries are famous for bringing rack and ruin to people who misuse the land. We cannot rule out wights and other guardians; however, they are not the best fit.

The rippled-air entity had a humanoid shape, and was high up against the trees. Sasquatch have humanoid shapes, and are usually seen in forested areas. They are associated with a cloaking ability that renders them invisible or partially visible. Some encounters with them are accompanied by sensations of intense dread. They are often described as being between 6.5 and 10 feet tall, though smaller ones are seen. Fifteen feet up in the trees exceeds that; however, Sasquatch are also associated with a host of supernormal abilities, such as teleportation. Might levitation be possible as well?

Ben states that other people see “things” including Sasquatch-like beings in the woods, as he and his friend did on the one occasion described above, thus establishing the presence of such beings in the area.

Sasquatch is a partial fit, but not the best.

Remote areas are home to sightings of many mysterious creatures, who appear and suddenly disappear. Ben was not aware of specific cryptid sightings in the area (in addition to Sasquatch).

I also consulted Linda Godfrey, author, researcher, and a leading expert on dogmen and Sasquatch sightings. She speculated that if not made by a small animal, the marks may have been made by something looking for hidden objects.

Ben is familiar with animal evidence in the woods, and did not feel the gashes and hole were made by animals. Nor would animals account for the rippled-air shape in the trees, the dread, and other phenomena.