On Death, Burial, and the Presence of the Dead

On February 1, 2017, my guest on my radio show Strange Dimensions on KGRA was Eric R. Vernor, a publisher and prolific author on occult and paranormal topics, and a paranormal researcher. We explored his new book, The Book of the Dead: Death and Mourning Through the Ages, available on Amazon and darkmoonpress.com. The book brings to light some of our disconnects with dealing with the dead, and also the ways we are trying to restore our relationships with those who have passed on. On one hand, the paranormal “reality” craze has turned the dead into entertainment fodder. On the other hand, attendance at séances, ritual dinners for the dead (dumb suppers), and contact experiences such as black mirror scrying are on the rise, attended by serious seekers. 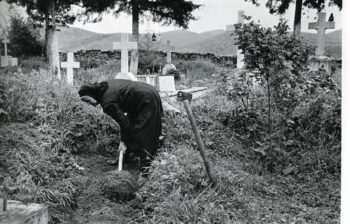 Centuries ago, people had a much closer relationship with death and the dead. Many buried their family members in private plots, often on their property, especially if no churchyard was available. Today we in the West find this a morbid, even creepy, practice. We’d rather get the dead out of the way, safely interred in a cemetery or mausoleum, which we can visit at times of our choosing.

Interestingly, in most states in America it is legal to bury someone in your yard or on your property, provided you follow certain standards. You must have a death certificate, and the body must be properly contained and buried at a certain depth. Do-it-yourself funerals have gained interest as the costs of formal burials have risen into the thousands of dollars. There are mitigating factors, however. If you move, you can’t dig up the body and take it with you, unless the remains were cremated and contained in an urn. And, you must disclose the burial to potential buyers. Understandably, not everyone will be enthusiastic about the remains of strangers interred in the yard.

Back in the 1990s, I went out to interview a man in upstate New York about his UFO sightings. Upon arrival, I quickly found him to be rather eccentric. I noticed that a large altar was on display in the living room, against one wall. It appeared to be straight out of a church, formally draped and decorated with religious objects. In the course of our conversation, I commented on the altar, and the man matter-of-factly divulged that his wife was buried inside it. Apparently, he could not bear to part with her in any way. The idea of a dead person interred in a living room altar wad so disturbing to me that I soon ended the interview and made a speedy exit.

I doubt that was legal. I probably would have been less rattled had she been buried in the yard, but the notion of the dead being on the premises of the living still was unsettling. I had a similar reaction when friends of mine bought an old house in Connecticut and discovered aged family graves in the dirt floor basement.

Back then, I hadn’t done the extensive research on death, dying, and the afterlife that is under my belt now. I reacted the way most people would react.

Years later, I journeyed to the other side of the earth, where I encountered much different attitudes toward the dead and their place among the living. I spent two months in Japan, where I became acquainted with people and occasionally was invited into a home. This was unusual, especially in urban areas, for most homes are quite small, and entertaining is usually done in restaurants. 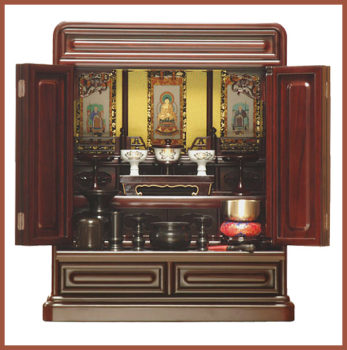 One night I was invited for dinner at the home of a single woman. She had what at first I thought was some sort of ornate dollhouse. When opened, I saw that it was a butsudan, a personal Buddhist shrine or altar unique to Japan. The butsudan is like a miniature temple, and contains an image of Buddha. Names of a family’s deceased ancestors are inscribed on tablets. The roots of the butsudan date to ancient India, where early Buddhism took shape. The butsudan, said my friend, housed the spirits of her ancestors, and provided a way for her to maintain a relationship with them.

When the food was ready, she got out small dishes, filled them with food, and placed them—complete with chopsticks—in the shrine, and made an offering of a prayer. She explained that her ancestors would eat the spirit, or essence, of the food.

I was fascinated to learn that this was a custom in many homes, to provide a place for the spirits of ancestors. It seemed natural and even proper for the presence of the dead to be at home in this way. I was so intrigued that I went off in search of more information, and discovered in Tokyo an entire district of businesses dedicated to selling these shrines and accessories. Some were quite simple and others were elaborate, large, and expensive, costing thousands–even hundreds of thousands–of dollars.

These home temples underscored a marked difference in our attitudes toward the dead. In the East, the dead are still considered to be members of the family, and can be petitioned for help in prayers. In the West, the dead feel remote to most of us—they have “gone away.” 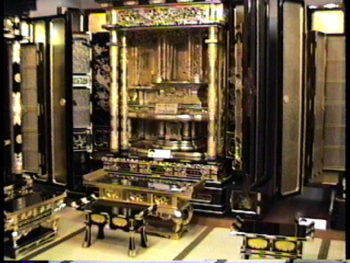 There is a trend in the West, especially in the Wiccan and Pagan communities, for a counterpart to the butsudan: the altar for the dead. It can display anything of spiritual, religious, or personal significance. By paying attention to the altar, one can maintain a close spiritual tie to family, friends, and even pets who have passed on. I adopted this custom of the personal altar years ago, after my experiences in Japan.

I suppose in his own way, the UFO interviewee was seeking to maintain an emotional and spiritual connection with his deceased wife, albeit it in an unusual way.

For more information, you can listen to the show with Eric R. Vernor for free. It is posted in the archives at kgraradio.com. Click on my show page, Strange Dimensions, and then on the “Archives” icon at the top of the page.