Spirit Attachments and the Perils of Thrifting

Who doesn’t love a good find? Many people enjoy thrifting, browsing through thrift, secondhand and estate stores and markets in search of items that fill a need at home, or strike the fancy. Sometimes the bargain objects come with an unusual and unseen price tag: spirit attachment. When the object arrives home with the buyer, the mayhem starts. 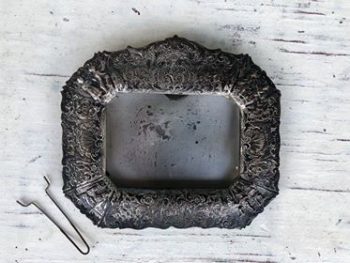 Jean [not her real name] went out thrifting one day. Her attention was captured by an unusual silver picture frame that was old and ornate. It was beautiful. She snapped it up and added it to other items she purchased that day. She carried the frame home in a sealed plastic bag.

The next day, Jean opened her bags and began washing her finds. This was a standard practice with her. The cleansing not only washed dirt away, it carried away old energy. While she washed, Jean studied all her items and appreciated their workmanship and detail. She mentally sent love and light to their anonymous previous owners, conveying how much she loved the objects and would them a safe home where they would be appreciated.

In most cases, such a physical and spiritual cleansing would eliminate any clingy unhappy energy from previous, unknown histories of usage.

Not in the case of the silver picture frame. 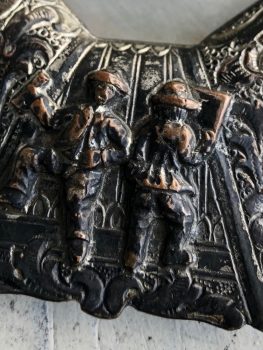 As Jean removed the frame from its sealed bag, she suddenly felt a weird energy coming from it. She noticed, for the first time, that the frame had odd engravings on the side: figures that appeared to be farmers drinking, a farmer and his wife dancing, farmer and a woman sitting in a chair with a farmer in front of her. On the surface, they looked like ordinary country folk figures, but there was something about them that unsettled Jean. She tried to brush the feelings aide and started cleaning the frame with toothpaste and toothbrush, something she did for anything silver.

“Instantly I got sick,” she said. “I had a headache and felt dizzy, so I stopped cleaning the frame and dried it off. I sat down at my desk with it beside me, still thinking nothing of it, and tried to locate some information about it on the internet. The headache got worse and I felt even sicker. I took the frame outside. I put it in its original bag, threw a bunch of salt into the bag and said several prayers. I did not bring it back into the house but left it on the porch.”

She could not get the engraved images of the figures out of her mind. The face of one of the men had a heavy impact on her for reasons she could not explain. “I couldn’t get the face out of my head,” she said. “It was terrible. My thoughts were so dark that day. I honestly thought something was happening to me mentally. The faces kept showing up in my head and I had a terrible feeling of unimaginable horror and dread all day. I wish I could put into words the horror I felt when I looked into the faces of those etchings. It was so dark. Like nothing I ever want to experience again.”

Jean continued to feel unwell. Whenever she went outside to sit on the porch, she felt worse, despite surrounding herself in white light and prayer. A creeping certainty that something very dark attached to the frame filled her with dread. The once beautiful frame now seemed quite sinister. 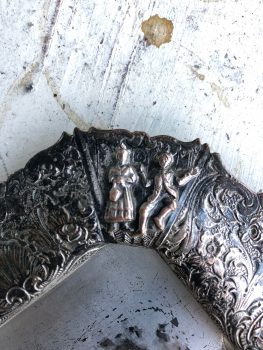 After doing a bit of research on spirit-afflicted objects, Jean and her husband decided that they had to bury the silver frame to banish the unwanted presence. They took it into the woods about two miles from their house. As they interred the frame, the animals in the woods made weird sounds as though they were screaming and laughing at them.

When they drove away, Jean heard a loud shriek like a witchy cackle. She thought perhaps it was her jumpy nerves and imagination, all in her head, and said nothing. Then her husband piped up, “Did you just hear that?”

The fact that her husband had heard the same cackle upset and frightened Jean even more.

“After we buried it, my actual soul felt like it had been to a bloody battle and it was bruised and sore — but I knew that I was okay and it was over,” Jean said.

The baleful energy left their residential premises, but Jean has been permanently changed by her scary experience. “I’m never going thrifting again!” she vowed.

Jean has plenty of company. In Haunted by the Things You Love and Demon Haunted: True Stories from the John Zaffis Vault, John Zaffis and I document cases of spirit-attached objects – many of them secondhand – that caused serious problems for their new owners. Some of those persons did think twice about acquiring more secondhand objects.

Yet many people have homes filled with thrifting finds and never have an issue. What are the odds of a problem? It’s hard to speculate. We investigators only know of problems that are reported. How many more go unreported?

A good rule of thumb when thrifting is to pay attention to how an object “feels.” No matter how attractive it is, afflicted objects often have a peculiar or off-putting energy. Pay attention also to how your body reacts when you handle the object. Many prospective buyers are so taken with the objects and how “perfect” they are for a need that they overlook and even override the early warning signals.

In some cases, such as Jean’s, there are no early warnings. She did the right thing to take action as soon as a negative effect was experienced. Removing an object from the premises usually solves the problem. In her case, leaving it on the porch was not enough of a removal. Burying an object or tying it into a bag and casting it into deep running water are effective measures.

In many cases, we never discover exactly what is attached to an object, or why, because the past histories are unknown. Any negative reaction to an object is cause for immediate action to prevent an escalation of activity that then becomes harder to resolve.

Jean noted that she may have been particularly vulnerable because at the time she was dealing with heavy emotions and turmoil. “I am a very positive person and I am full of love and light,” she said. “This frame came into my life when I was very vulnerable. My friend had just passed away, and a family member was battling addiction. I was really struggling for a few days. I was grieving and had just finished working on a huge Halloween project for my shop. It was dark and in great contrast to my usual work. I know that this evilness seeped in when I was weak.”

Anyone can be more susceptible to negative forces when their defenses are down. Pay attention to your emotional state. If you’re down, it’s not a good time to acquire secondhand items.