Terrifying Encounter with a Skinwalker

In Native American lore, especially throughout the American Southwest, skinwalkers are sorcerers who shapeshift into animal form at night and practice their black arts.

J.G. Bucklin is part Apache, and related to me a terrifying experience he had with a skinwalker.

JGB: I saw the a skinwalker around 1993. I was working as security in a hotel in Taos, New Mexico It was a beautiful summer and the nights were warm and comfortable. I always worked the graveyard shift. This hotel was haunted and I experienced a few things, but nothing prepared me for what I saw that night.

It was after midnight, close to 2 AM, and I was in my car patrolling. I parked under a tree and I guess I semi-drifted off. Suddenly, something struck the bottom of my car with enough force to make it sway. This car was a rather heavy 1978 Thunderbird. I started the car and pulled forward turning around in the lot. 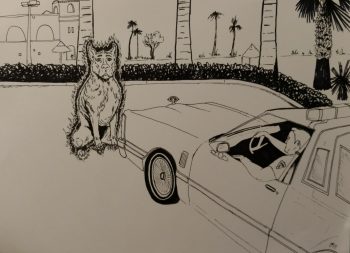 Sitting where I had been parked was a dog-like thing with an odd face staring me down. I felt a dark energy about it, like it was invading my soul. It had human features, especially the eyes. They had that spark of human, but they were whole evil. Its face didn’t have a long snout. It looked like a human nose, a bit extended but not black tipped like a dog. As for size and body, it was a bit bigger than an adult German Shepard. Its fur was rather mangy and dirty-looking black and tan. It was thickly muscled.

Looking at this thing gave me that feeling of fear instinct, when you know you’re in big danger.

I hit the gas and tried to hit it with the car. It ran off the property onto native land across the road. It then ran back across onto the hotel property. I made chase. It ran into a third parking lot.

It then ran into an area called the “ponds,” where the weeds grow about eight to nine feet tall. There were two large cesspools there, and the area was really weed-filled. I parked and grabbed my pistol and ran on foot after it. I could hear it moving through the weeds. It was circling, trying to come up behind me. Then it rushed and threw me aside like I was built of matchsticks! I felt around and found my pistol and made chase. What ran in on four legs ran back out on two! It looked like a shambling, nude man-like thing that screamed as it fled. The scream was both human and animal – it was horrifying.

The thing ran across an area that had sagebrush and cactus, in the direction of some houses, so I could not risk a shot at it.

That morning I told the hotel housekeeping crew what happened. Some of the girls were natives from the Taos pueblo. They said matter of factly, “Oh yeah, you saw a skinwalker.”

Since then my luck has not been the best – several failed marriages and failed kidneys. My bad luck may or may not have been a result of my encounter. I saw to it that a shaman, Tall Eagle Boy, saged, rattled and prayed over me within the week. We blew sacred smoke. He passed away since.

REG: Do you have any idea why the skinwalker engaged with you?

JGB: I know it was stalking me. I was parked on hotel property but who knows how long he was prowling. He may have been watching me for weeks, or even months. My big question is, how did it fit under my car, which was somewhat low and quite heavy. When it struck the bottom of my car, I felt the jolt and the car actually “rocked.”

REG: Have you recovered in health and luck?

JGB: Since then my sacred protector is a large white wolf that appeared to me in a dream, and I have seen it in fleeting glimpses. Among my people, the wolf is brave, and takes care of its family.

My health has diminished but has stabilized. It has taken time, but my luck has improved greatly. I think that prayer and the timely introduction of my spirit animal may have broken any hold skinwalker may have had – I hope.

Skinwalkers are common among more than the Navajo – Apache and other tribes also have these abominations. Our people learn to avoid them and not speak of them. Like a big dummy, I made the mistake of attempting combat. 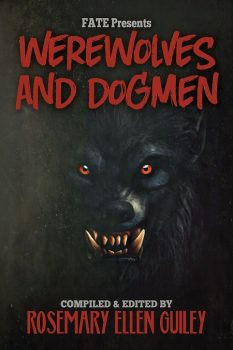 REG comments: The reason for this engagement with a skinwalker will probably never be known, but for some reason, J.G. Bucklin landed on its radar. Perhaps it meant to toy with him by bucking the car. Skinwalkers are shapeshifters, and so it would be possible for them to fit into narrow spaces. When J.G. gave chase—instead of leaving the scene, as many would have done—it retaliated by leaving its mark of a debilitating effect on his life. Similar effects have been reported after engagements with men and women in black, black-eyed kids and people, the Djinn, and other entities who carry a baleful energy.

The safest thing to do in an unexpected encounter is to leave the scene, and especially avoid eye contact.