UFO Underground No. 2: An “Alien” Anti-Gravity Metal and the New UFO/ET Disclosure

After a period of quiet, it appears the US government is getting ready to release more disclosure, in its latest bit-by-bit campaign to indoctrinate the public about ETs. It’s not yet certain what the public will learn, but one possibility is the existence of a metal that has the capability of defying gravity and floating and spinning in the air. Yes, we have – and have had for some time alien technology.

Supposedly, The New York Times has ready a vetted article on the floating metal, awaiting approval for publication. 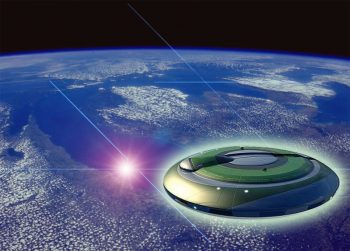 The mystery metal is a thin, shiny substance that is 70 atoms thick. Each atom layer is a different but known element layered one atop the other. When exposed to certain electromagnetic fields, the metal floats in defiance of gravity. The metal has been studied by Robert Bigelow’s scientists, and perhaps other non-governmental agencies as well. While scientists can identify the composition of the metal, no one knows, as of yet, how to duplicate the assembly of the atoms in layers.

Once that is figured out, will we have reliable anti-gravity on demand? Anti-gravity experiments to date have produce results but are unreliable for replication – and may depend on unique factors such as the operator’s consciousness or mental projections.

It is not likely that the mystery metal will be officially tied to alien craft but will be “unknown” or “unexplained.” The disclosure about it was slated for earlier this year but was delayed.

Also said to be in the works are announcements from former rock star Tom Delonge and his To The Stars Academy (TTSA). Word has it that DeLonge and his team of experts have been briefing members of Congress who were previously not among those “in the know” about the alien presence on Earth.

These pending releases are part of the latest “new disclosure” effort that involves a multi-pronged approach utilizing figures such as DeLonge, major media outlets, entertainment, and selected personalities in the UFO field. Rather than the “big announcement” envisioned by disclosure advocates, disclosure about the alien visitors – and residents – and their technology is being parceled out in small doses. The effect is a gradual acclimatization of the public to the ET presence. In fact, the information is likely to be eked out in such small doses – and with artful spin – that it will just quietly seep into mass consciousness.

Measured and managed disclosure has been around for a long time, conditioning public beliefs about aliens and whether they are good or bad. The most visible event of the new wave of disclosure began on October 11, 2017 when DeLonge unveiled his long-hyped business endeavor, TTSA, a public investment venture. In the announcement, streamed live on the internet, there was little direct mention of disclosure, UFOs and aliens, but make no mistake, it is part of a carefully orchestrated rollout of disclosure.

For some time now, DeLonge has talked about his secret high-level meetings with government, military and defense industry individuals. Some of these people are visible in his new business venture – and some are not, remaining invisible behind the scenes. They have among them the highest levels of security clearances. Why are they working with DeLonge? Probably not because they think he’s a great guy waving a feel-good flag for “let’s all come together and change the world.” Rather, they have been put in place to manipulate on a large scale the public perception and behavior concerning ETs. The disclosure in the works seems to be aimed at increasing the “management” of humanity as a whole.

DeLonge makes an ideal spokesperson for managed disclosure. He has a worldwide following, especially among the all-important millennials, those born roughly between 1980 and 1994. He has an intense, lifelong interest in UFOs and ETs. He has been tried and tested in a long period of exposure to the “inner sanctum” of government intelligence concerned with ETs and UFOs.

The level of research in science and technology proposed by the academy requires huge amounts of money – the kind best sought from heavy hitter investors in the business sector. The Academy, however, has been set up as a Public Benefit Corporation that encourages “little guy” investing. Crowdfunding is popular. It makes people feel like they belong, that they have a personal stake in something big and important. However, they also become open to influence.

The Academy has a three-pronged organization: science (research), aerospace (applied technology), and entertainment (supposedly education). No mention was made of developing alien-originated technology in the unveiling October 11, though references were made to “unknown” technology.

As for the entertainment end of it, the term “story-telling” was used a number of times in DeLonge’s announcement program. We are going to get more dollops of disclosure fed to us via entertainment, especially the fiction of Hollywood films. When it comes to ETs and aliens, Hollywood produces what the government wants us to know. Good aliens, bad aliens – our responses to either theme are monitored to gauge what we will accept.

As a PBC, the Academy has the noble public purpose of “Education – Community – Sustainability – Transparency.” It is doubtful there will be much transparency, judging from the rosy cheerleading of the program. Public reaction to it was mixed.

The next major disclosure announcement was in December 2017 via major media outlets such as The New York Times, that the US Department of Defense’s $22 million Advanced Aerospace Threat Identification Program (AATIP), which examined UFO evidence, was still in existence despite having been “officially” shut down in 2012. Supposedly funding for the program was ended then, but it carries on.

Now we are poised for more revelations. There is a lot of material in the intelligence vaults ready to be dished out. What will we get next?