Attempted Abduction by a “Lobster-Thing”

When entities contact humans, do they appear in their true forms or in shapeshifted forms intended to have a specific effect on the experiencer? In my years of interviewing experiencers, I have heard an amazing range of descriptions. One of the most unusual of all is the case of the “lobster-thing,” which attempted to abduct a teenaged girl in Greene County, Pennsylvania, which is the far southwest corner of the state. 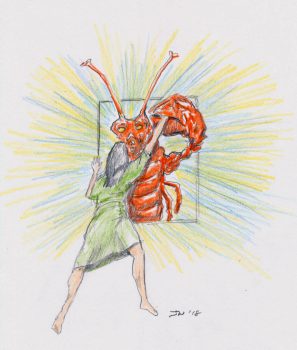 Sherry (not her real name) grew up in a remote area of Green County that brimmed with paranormal and unexplained phenomena. Her family was familiar with UFO activity, the presence of screaming Bigfoot, the sliding black forms of shadow people, ghosts, and nocturnal visitors of unknown origin. Sherry’s mother explained away the visitors as either aliens or departed grandparents looking in on the family. In addition, there was a “veil,” a mysterious force field of energy, that crossed one of the hills behind her home, where Sherry liked to hike.

When Sherry was 14, she had an alarming experience that might have been a botched alien abduction. She “woke up” to find herself dangling by one arm in the claw of a huge creature that resembled a crayfish or a lobster. It had enormous antennae and was about seven to eight feet tall. The creature was in the window, which was missing its glass and appeared to have become a doorway that was strangely lit.

The creature attempted to extract her through the window area. Sherry struggled against it, and it dropped her to the floor.

The next thing she knew, Sherry was awake in the morning lying on her side on the floor. Her shoulder ached mightily, and she had a huge black and blue bruise on the arm where the creature had taken hold of her.

At first, Sherry thought she had dreamed the experience – but she could not explain how she had landed on the floor, why her shoulder hurt, and why she had a massive bruise below the elbow.

The experience, which took place in the late 1970s, sounds like a B-grade science fiction movie sporting giant insect-like aliens. Do aliens really look like giant lobsters – or do we see what we are able to see when we look upon a form we do not comprehend?

Was this entity an extraterrestrial entity, or something closer to earth, perhaps from another dimension attached to the planet? Whatever its purpose, it never returned.

Sherry did experience ET-like abductions, however. She has memories of being taken aboard alien ships at about the same time as the lobster-thing experience and being in rooms where she saw surgical-type tools or instruments and gray aliens. She has no recollection of being probed like other abductees or experiencing any pain.

Now that Sherry is older, her alien experiences have come to an end. This follows a pattern observed by abduction researchers: experiences begin early in life, may involve more than one family member, and sometimes come to an end when the person reaches adulthood.

Sherry continues to have other kinds of experiences: the shadow people, Bigfoot, the “veil” and other phenomena still haunt the landscape.

For more strange stories, see Haunted Hills and Hollows: What Lurks in Greene County, Pennsylvania, by me and Kevin Paul, a paranormal investigator and lifelong resident of the area. Much of Greene County is sparsely populated – by humans, that is.