In UFO Underground No. 2, I reported on the existence of an alien metal, 70 atoms thick, that defies gravity when exposed to certain electromagnetic fields. The ability to defy gravity certainly explains why so many eyewitness accounts of mystery lights and craft describe aerial maneuvers beyond our technology.

If aliens possess such advanced technology, why would they invest time trying to understand primitive means of locomotion employed by humans? Apparently, they do, according to the following testimony. 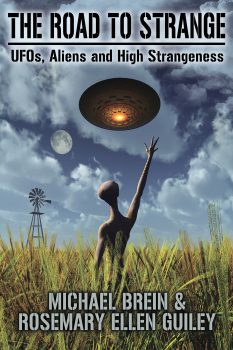 Karl Petry is an exceptionally talented psychic medium who can see into the past, contact the dead – and have contact with aliens. He is the author of Absent Witness. A friend of the late Ingo Swann, he picked up a technique or two from Swann concerning psychic skill. The following is his account of repeated experiences in which he was taken aboard an alien craft to provide information about the mechanics of Earth vehicles and machinery:

All my life I’ve had experiences where I am pulled out of my sleep and taken somewhere to watch something or participate in something. These experiences are like lucid dreams, except they are real, physical and real-time. Usually they involve the dead or time travels into the past. Since 2015, I’ve had an increasing number of experiences involving aliens.

Around July 20, 2017, some alien experiences started that went on nightly for two weeks. I would be trying to sleep and suddenly find myself inside a spaceship that was huge inside. I witnessed aliens zapping up cars, trucks and machinery into the craft and then disassembling them, as though they were trying to figure out how they worked. They were going all over the world, taking vehicles and machines and tools.

I felt as though I was seeing through their eyes. They communicated with each other by telepathy, but I noticed that as they handled each part, I would think, “This is a bolt,” “This is a drive shaft,” and so on, and it occurred to me that I was identifying parts for them. I’m pretty skilled as a mechanic.

The aliens were tall grays. I’m 6-3 and judged them to be about 5-8. Their hands were like ours but thinner and with much longer fingers. Their skin was a light sickly gray color, and they were dressed in blue-green uniforms made out of some kind of shiny material like satin.

They lifted up whatever they wanted by a beam that came from the ceiling of the craft. I saw a four-cylinder car taken from France, and when the beam turned off it slammed on the floor of the craft, and I could hear the metal shake.

They opened the car door and looked inside and then seated themselves, looking at the dashboard in total amazement as if they couldn’t believe it. They wanted to take it apart, but they couldn’t because they didn’t have the right tools. They went to a garage in France near where they had taken the car, and zapped up tools in boxes on wheels, like you would find in a machine shop.

They took the car apart. They held every part in their hands and looked at it, and then took another part off. They were interested in the tires but confused by them. They realized they were filled with air, which really amazed them.

They also worked on some Earth machines I could not identify; one looked like it rolled large sheets of metal. They also had a tractor truck.

I had the feeling that they had been doing this for quite a while – taking machines and cars. They never reassembled anything, and they never returned anything. They had no interest in electronics – no televisions, radios, computers. They were interested in mechanical things.

They were full of wonder and curiosity. We think of ETs as sophisticated and light years ahead of us in technology, but our cars, combustion engines and machines were amazing to them. Maybe they have a need for moving things around on the surface of the Earth, and whatever they have is not as good as what we have.

I noticed they had a strong negative reaction to gasoline. I don’t know if it was just unpleasant to them or was toxic and dangerous, but if they smelled gas, they were repulsed. They also didn’t like getting grease on their hands, but they didn’t make the same recoil as they did for gasoline.

This observation didn’t stop at night for me. During the day, I would be going along in my activities and get sudden intrusions of visions that picked up where I’d left off at night. This went on and on.

Since I could look out through their eyes, I sensed their knowledge of their superiority to humans. They are so advanced compared to us. But they gave us respect for coming up with steel and aluminum and engines.

After two weeks, the experiences stopped, and then resumed in spurts. I won’t have any for a while, and then I will have a cluster of them, with the aliens still doing the same things.

I’ve had other unusual encounters with aliens. In 2008, when lights and craft were sighted over Stephenville, Texas, I was taken aboard the ship along with some other Earth people. The ship was about three to four stories high. I was at the edge of the ship looking down and could see everything that they – the aliens – could see. Even though we were high up in the sky, it was like we were down close to ground level. Everything was transparent. I could see people in their cars, houses, even behind trees. I realized that there was no way to hide from them. If they want to take you, they will and there’s nothing you can do about it. It was a real eye-opener for me. I could not see the aliens, but I knew they were there. It seemed like they wanted us all to know, Don’t even think about trying to hide from us, because we can see you wherever you are. It wasn’t a threat, but a show of power.

Then in 2015, I started getting downloads of mathematical formulas while I was trying to go to sleep. It was like a blackboard appeared in front of me and would be covered with equations, which then flashed off and were replaced by other equations. I have no background in math and had no idea what they meant, or why I was getting them. That happened for two nights in a row.

The endless dismantling of primitive machines to see how they work makes little sense; but then, so many phenomena related to alien encounters defy the “rules” of logic. How many cars, cows and people do the aliens need to probe or take apart? If Karl served a function to name parts, why didn’t the aliens put the information into their own “product manuals” for further reference, instead of repeating the same activities over and over again?

Karl is not the only contactee to get mathematical formulas that are incomprehensible or, if remembered and written down, make little sense. Likewise, contactees with no medical training say they are given the cure for cancer and so on but have no way of moving the information into society. Again, there is a Trickster element, for if the aliens wanted to put certain information into the heads of humans, they would select people who could comprehend the information and do something with it.

The implied message from the Stephenville ship is ominous, however. We humans can run but we cannot hide; resistance is futile. Are they biding their time, waiting for a perfect moment?

Here’s a prediction: Expect to see more emphasis in the media and entertainment about the aggressive, hostile aliens who have already established a presence on Earth. Humans resisting hostile aliens will be a significant theme in books, television shows and films as cosmic chess pieces get moved around.

[Karl’s story is included in my book The Road to Strange: UFOs, Aliens and High Strangeness, co-authored with Michael Brein, a collection of personal encounters and sightings.]