Disclosure, UFOs, and the Alien Presence on Earth

[I wrote this foreword to We Are the Disclosure: Part I, a book by Miguel Mendonca, published in 2016, about the case for grassroots disclosure of the alien presence on Earth.]

Disclosure has been a hot button in ufology ever since 1947, when pilot Kenneth Arnold saw unknown silvery discs flying near Mt. Rainier in Washington State, and the modern age of UFOs and flying saucers was born. There followed a gush of accounts of sightings and encounters with all kinds of aliens, including “space brothers and sisters”—but no official acknowledgment of contact from government quarters.

For 70 years now, many ufologists and experiencers have claimed that a government-driven conspiracy has kept the lid on the truth about the extraterrestrial presence on planet Earth. Advocates for disclosure have campaigned for an official acknowledgment and release of proof of contact. The disclosure advocates have said—every year for years—that we are on the verge of the “big disclosure”: government is going to come clean, and tell us all about what has been going on and what they are doing about it.

So far, no such announcement has been made—and it is unlikely that one ever will be made, at least in the foreseeable future. Reports, files, and papers have been released, but no government has stepped up to the plate and said, “We are in contact with extraterrestrial beings, and they are here among us.”

We should not continue to hold our breath. There is good reason why there is no official disclosure announcement. It would create tremendous upheaval on all fronts—political, social, religious, cultural, and more. The effects of contact extend far beyond the ability of any government to manage with the sudden impact of a “big announcement.”

Disclosure will not happen by announcement or pronouncement. Rather, it is happening every day, right now, in the contact experiences had by untold numbers of individuals on this planet, who reveal their stories to the public.

The history of contact goes back to the earliest human records. We have been in contact, and we continue to be in contact, with nonhuman intelligent beings who have pursued various agendas with us. We the people are the disclosure, not any government, and we always have been so. We do not need a pope or a president to tell us what we already know.

The knowledge and truth of contact has been held in secret by many individuals who have feared—and rightly so—the ridicule of their families, peers, the media, and others if they discuss their experiences with non-human intelligent beings. We have a regrettable track record of labeling contactees as “crazy” and “unstable.”

Fortunately, thanks to brave souls who have come forward with information they feel is urgent to be known, that tide is gradually turning. The more personal disclosure we have, the more public discussion and media coverage we generate, and thus the more we human beings can grapple with the truth of alien contact and interaction, and its implications for us individually and for humanity. 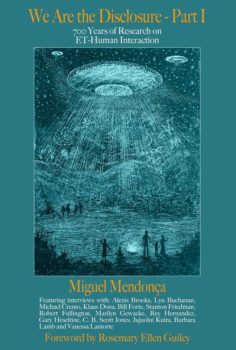 That is why Miguel Mendonca’s book, We Are the Disclosure, is so vitally important. Here, in the essays provided by leaders in the field of contact experience, are frank discussions of all the aspects of contact already going on, and where contact may take us into the future. There is much common ground, but also a diversity of views. We need to know and think about it all, from every possible angle—and that is something that no official institution of any kind can provide.

Disclosure is and always has been a grassroots movement. As the waves of it spread, disclosure is permeating more of mass consciousness and popular culture, waking up and educating others. This is truly the best way for disclosure to take place: gradually, so that people can absorb the impact of it bit by bit, rather through the dropping of a nuclear information bomb from the government powers above.

As an author, researcher, and investigator for more than thirty years now, I have always focused on the nature and ramifications of contact—especially the transformative effects—as the true ground zero of ufology. Yet, the field almost from the beginning has chosen to mire itself in narrow “nut and bolts” pursuits, endlessly discussing the same alleged UFO crashes, trace evidence, and cover ups, and ignoring aspects such as the role of consciousness and the para-physical nature of contact. I am all for finding hard, physical evidence, but seventy years on, we have precious little of it, despite endless stone-turning. The evidence that has soared, on the other hand, points to contact that is part of an expansion of consciousness beyond this physical reality. It is no less real than any physical evidence.

What’s more, those who have had extraterrestrial contact also experience a host of other kinds of contact and extraordinary experiences that one usually finds within the field of metaphysics—a field usually overlooked by “traditional” ufology.

In my career (and the authorship of more than 65 books), I have always observed the links among the metaphysical, the paranormal, and ufology. You cannot disconnect them—they are interwoven into a tapestry of contact that has at its core the transformation of consciousness. For some, certainly, contact goes no further than a bizarre and unexplained event. For others, contact takes them deep into soul-searching territory about who they are, why they are here on Earth, where they have come from beyond Earth, and what is their connection to a cosmic whole or scheme. This is not nuts and bolts territory, but pertains to the advancement and evolution—the ascension—of the human species into higher and cosmic-level consciousness.

In my work as a board director of the Edgar Mitchell Foundation for Research into Extraterrestrial Encounters (FREE), I have seen these implications reflected globally in the first-ever academic, worldwide survey of experiencers, the results of which FREE is releasing in stages. Contact is happening every day, everywhere, and to the citizens of Earth in every walk of life. That is where we need to look for disclosure.

Personally, I believe that our experiences are influencing a gradual mass-level shift that will bring about a much different reality than the one we live in now. There will be more contact in that reality, and it will be part of life, not the exception. Contact will shift from unusual experiences to relationships with other beings. We will all have more extended (i.e., psychic) consciousness, and even our bodies will change to accommodate shifts in consciousness. These changes have been forecast in the past by mystics such as Sri Aurobindo and Pierre Teilhard de Chardin, and in seminal works such as The Future of the Body (1992) by Michael Murphy. They are happening now.

There are already discussions over the language and terminology of contact. Are the terms “ufology,” “UFO,” and “ET” obsolete? If so, what should replace them? With the depth and breadth of contact experiences now coming to light, these terms do not adequately address the contact spectrum. They still describe some experiences, but the range goes far beyond the media-stereotyped UFO and ET. We will continue to grapple with those and other questions about contact.

We, the grassroots movement, will have to figure out more answers to our questions as we go along. In their individual experiences, people are already making their own decisions about how to react, what to believe, and how to move forward. They have had to do it alone because most of them have had little, if any, support, including from ufology. The ability to openly discuss these matters is essential as more and more experiencers find each other and form communities.

This is the kind of disclosure that we need, and which is taking place right now. And we need good sources of information such as We Are the Disclosure to help propel the messages and the Truth.