Men in Black Visit a Library in North Carolina UPDATED

My husband Joey and I have been hired to lead investigations at The Webb Memorial Library & Civic Center in Morehead City, North Carolina, that is known for being haunted. We’ve been investigating the place for a year and the level of activity we experience there is always amazing. I regularly see spirits in the library; some seem to be residents there, while others seem to just pass through. 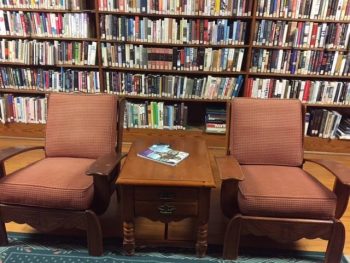 Chairs occupied by the two MIB

On May 25, 2017, I was communicating with a friendly resident spirit at the Webb when our SB-11 ghost box began acting strange, then jammed up. Then two identical Men in Black figures appeared in the chairs shown in the photo. They were classic MIBs with their black suits, pale skin, and robotic appearance. They sat there, hands on knees without moving. From them emitted a very weird energy, and I got the impression they were telepathically jamming the ghost box to prevent us from communicating to one of the spirits present.

It also felt to me that rather than spirits, they were some kind of mental projections. I’m not really sure how to explain it, except to say that when I’m seeing the spirits, I have the sense of them actually being there. This felt different. With these guys, I felt like I was watching images being projected into the space. I was struck by how straight their backs were. It’s hard to imagine anyone being able to sit up that straight and that still – it was unsettling.

We placed an EMF meter on one of the chairs and it went into the red. The MIBs did not respond when the EMF was placed in the chair, which is why I got the sense of them being projections. They didn’t respond to anything happening in the room, but seemed singularly focused on the SB-11.

My husband and I had a group of eight with us, but I was the only person who could clairvoyantly see the MIB. I acknowledged the MIB to everyone present, but they didn’t respond. I tried to communicate telepathically with them — still no response. We tried to capture them in photographs without success. The chairs were empty, as shown in the photo.

The MIBs sat motionless, emitting that strange, weird energy. Our agreement with the library is for use for a 90-minute period. We stayed longer, and the MIBs continued to sit in the chairs. They were still there when we finally had to leave. I said goodbye to them as we were leaving the room, and they just sat staring forward with the same lifeless expressions on their faces. We had another investigation two nights later. I was hoping they’d be back, but there was no sign of them that night.

The whole thing had me completely bewildered! I’ve seen some really weird things in the Webb, including a phantom clown walking around with a handful of balloons, but the MIBs were by far the weirdest.

I have in the past witnessed ghostly heated meetings going on in the Webb that consisted of a room filled with men who appeared to be government officials. I’m not sure if that is connected to the MIBs, but there was someone there the MIBs did NOT want us to talk to! There is an interesting history regarding WWII, and government involvement in the area, so that might be the connection.

I did some research of the area and found an interesting account of a UFO seen in this area in 1953. It was reported by at least two individuals. Just after dark, the craft was observed flying over a hospital, which has since been replaced by a hotel that is directly across from the Webb.

One of the witnesses was a woman. According to the NUFORC report, “As she was backing out of her parking space she saw a round, saucer shaped craft approaching from the south (over the water). She stated it wasn’t very high & made no sound (again, her windows were down at the time). It was low enough that she could easily make out round, what she called “portholes” around the periphery of the saucer. She stated there was yellowish/white light coming from the “portholes.” Unsure whether it was actually windows of a sort she was seeing or if it could have been round lights? She stated it was moving slowly and silently. It was flying, again, from the southeast to the northwest, over the hospital.”

There have also been UFO reports in the same vicinity in February 2017.

MIB Update:
On Thursday June 8th we had another investigation at the Webb Library. Several interesting things happened. We had a group of four with us, and as we were investigating the first floor on the south end of the hallway, two of our guests saw a figure peek out from behind a door partition down on the north end of the hallway.

Upon investigating I encountered two spirits. One was a very friendly young man who indicated through the SB-11 that his name was Jerry. In addition to Jerry there was a man dressed in a black suit standing in front of the back door to the library. I wasn’t able to make this figure out as clearly as I could Jerry, however I could see his black suit and the way he stood in front of the doorway with his arms crossed reminded me of the way a guard or a bouncer would stand. One of the guests who had seen Jerry peek out from behind the partition also noticed that the man at the door had black dress shoes on. That was all that he could make out. In retrospect, I think this may have been an MIB.

We investigated two more rooms on the first floor before Jerry eagerly lead us upstairs. The energy on the second floor is often heavy and oppressive and we frequently encounter pretty nasty spirits up there, particularly at the north end of the hallway. Jerry stayed next to me and seemed to be acting as a protector. Joey always goes to investigate the north end of the hallway by himself to check the level of hostility of a particular resident spirit there named Vincent. Vincent resides in the kitchen at the end of that hallway, however Vincent wasn’t present that night. 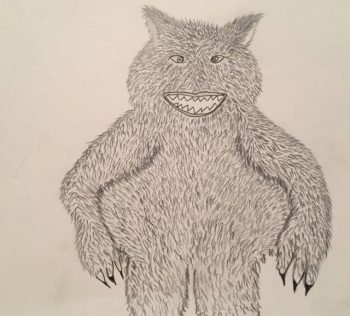 As our group headed down toward the kitchen Jerry called out “careful!” through the SB-11. Myself and couple of our guest who were quite sensitive as well opted not to go into to kitchen as the energy was very negative. I got an impression of a creature in the kitchen, as did another one of our guests. We compared what we were seeing and we both agreed. The attached illustration I created is a pretty close representation except that there was no way to capture the nastiness that emanated from this thing. Aside from that, it really did remind me of something straight from a Maurice Sendak book. By now, Jerry was standing at the entrance of the kitchen frantically motioning for everyone in there to come out. Just as they were getting ready to leave a very deep, guttural growl came through the SB-11. At which point everyone quickly left the kitchen.

In the next room Joey reached into his pocket and when he took his hand out, one of his fingers was covered with a clear goo. He checked his pocket and there was nothing in there to explain it. We still have no idea where it came from.
Later we were sitting in the room were I had seen the Men In Black previously. Jerry and I were sitting in the chairs opposite the chairs that the MIBs had been in. I asked Jerry about the Men In Black and before he could reply they showed up. This time standing behind the two chairs. I asked Jerry about them again and before a reply could come through the SB-11 one of the MIBs moved across the room to Jerry and had him by the throat. The other MIB remained motionless behind the chair.

As I watched Jerry struggle against the MIB I became very concerned for him and not knowing what else to do, I called on Archangel Michael who immediately appeared as a shimmer of light. As Michael appeared, the two MIBs vanished as did Jerry. Michael’s light shimmer remained for a moment then it vanished as well.

We had another investigation the following night and the creature was still there. Joey heard it growl (without the aid of the SB-11) when he went to close a door in the upstairs hallway. I did not see Jerry or the Men In Black that night.

Postscript from REG: Tonya and Joey Madia are long-time paranormal investigators, and members of the ad hoc group, the Mothman Irregulars, which I founded several years ago. I have done a variety of investigations with them in Pt. Pleasant, WV. Tonya is featured in my book Ouija Gone Wild, co-authored with Rick Fisher. She is writing her first book, which will be published by Visionary Living, Inc.