Phantom Running Man of I-675 Ohio

In the summer of 2008, Diana and Olie M. had a startling experience with a faceless, handless man who suddenly appeared alongside their car as they pulled onto an Ohio freeway late at night. The experience lasted about a minute—and forever changed their minds about the existence of paranormal phenomena and mysteries that defy explanation.

At that time, the couple worked cleaning carpets, and one of their clients was Circuit City. One summer night, they wrapped up their work at a Circuit City store in the Beavercreek area around midnight. They decided it was early enough to head for home in Kent.

They pulled onto Interstate 675 northbound at exit 17—near the Wright-Patterson Air Force base—and almost immediately a violent thunderstorm hit. Rain slashed sideways across the pavement, and the sky lit up with lightning. Thunder crashed. The freeway was deserted—there were no vehicles in sight.

The rain was so heavy that Diana and Olie decided to pull off to the side at exit 20 and wait the storm out. After about five minutes, the rain let up enough for them to feel safe getting back onto the road.

Olie eased into the right lane. Something caught his side vision. Looking to his left, he was astonished to see a man wearing a gray hoodie running very close alongside the car, even with his side window.

“Is that a man running on the road?” he asked his wife in disbelief.

Diana saw the figure, too. It was no ordinary man, however, which chilled them to the bone. 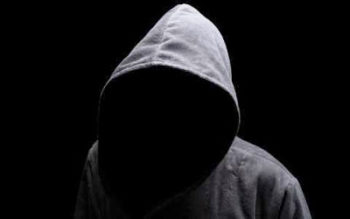 The hoodie only partially covered the head—but no face was visible. The man’s arms pumped up and down as he ran effortlessly alongside the car—but no hands were visible. Olie and Diana could not see below the waist. Even stranger—the mystery man was not getting wet from the rain.

The figure paid no attention to the couple or their car, as if they did not exist.

“Let’s get out of here!” Olie said. He floored the gas pedal and they roared off down the freeway. They did not look back, and kept on going until they reached home.

In trying to figure out what they saw, Diana and Olie thought they had glimpsed a figure from another dimension that somehow had broken through to this world by the circumstances of the violent storm.

The explanation makes sense and is one I would propose myself. Violent storms with rain, thunder and lightning—and the ionized air that results from them—have a long association with the manifestation of paranormal phenomena. Perhaps this figure was running along in his own dimension, and for a flickering minute, partially manifested to Diana and Olie without even seeing them. He was not entirely in our dimension, and so some details such as face and hands were not visible. It was not raining in his dimension, and so he did not get wet.

Another possible explanation is an apparition. Even though the figure appeared solid, its missing face and hands are characteristic of residual ghosts.

Personally, I favor the interdimensional explanation. However, some odd factors remain. Was the figure a human man from a parallel dimension, or was it an entity in the shape-shifted guise of a man? Was it a trickster entity out to have some opportunistic fun with a couple out on a dark and lonely stretch of highway? Whoever or whatever it was, it seemed to be aware of the couple’s car, even though it did not look over at them, for it kept pace as Olie sped up.

Which brings up a question about speed. The figure ran alongside the car at about 25 miles per hour, far above the range of most humans. Track stars can sprint at high speeds, and the world’s fastest man, Usain Bolt, has run at just under 28 miles per hour in a 100-meter sprint. This mystery figure was not sprinting.

Scientists speculate that humans could run as fast as 40 miles per hour if they could significantly reduce the amount of contact time the foot must spend on the ground. That’s not likely to happen any time soon. If this was an interdimensional man, did he live in a world where human biology—or perhaps bionics–is far more advanced?

I-675 is a 26.53-mile bypass of Dayton to the south and east and connects Interstates 70 and 75. It passes right by Wright-Patterson Air Force base. Exit 17 serves Areas A and C.  Exit 20 is Yellow Springs Road.

Wright-Patterson gained fame in ufology as the alleged storage site of crashed UFO debris and even alien corpses, starting with the famous Roswell, New Mexico episode of 1947. The debris and bodies supposedly have been stored in Hangar-18, in area B. In paranormal circles, the air force base is known for its haunting phenomena.

In 2014, mystery booms were reported near WPAFB on the night of November 16, and no explanation ever surfaced.

I could find no direct link between the Phantom Running Man and WPAFB, but in a field of study known for odd associations and coincidences, the proximity of the two is worth noting. It’s usually no accident when different types of phenomena happen within a certain area.

If anyone has any reports of similar sightings of the Phantom Running Man—or any other unexplained phenomena in the vicinity of I-675 and WPAFB, please contact me at reguiley@gmail.com.