The Phantom Hoodie Man of I-70 Ohio

Do phantom “hoodie men” haunt the highways of Ohio? Recently I met Chris Fortofer at an event in Dayton, where I talked about the Phantom Running Man of I-675, a hoodie figure with no face, hands, or feet that ran alongside a car on the highway late one night. Chris had his own encounter with a similar figure on another road.

Chris Fortofer has been a subcontract driver for the United States Postal Service for the past seven years.  He drives a semi-truck from Dayton, Ohio to Pittsburgh, Pennsylvania and back four nights a week hauling mail. He usually arrives in Pittsburgh around 10 PM and gets back to Dayton around 3:30 AM. He uses I-70 through Ohio. 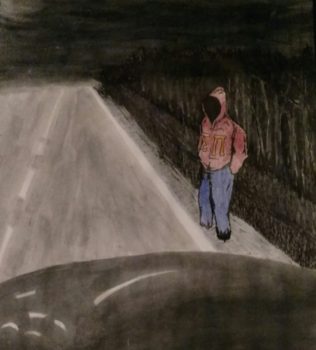 Art by Chris Fortofer. The Greek letters sigma and pi most closely resembled what Chris saw and are not intended to represent an actual fraternity.

For seven years, nothing unusual has happened on the drive. That changed in May 2015, when Chris encountered a phantom hoodie man standing on the side of the freeway—and acting quite strangely.

The incident occurred on an otherwise pleasant Sunday morning, about 1 AM. Traffic was light, and there was no unusual weather—it had been a cloudy night.

Chris passed mile marker 140, about 10 miles west of Zanesville, traveling at about 65 miles an hour. Suddenly his headlights hit what appeared to be a man standing on the right shoulder of the freeway. With a shock, he realized the figure was floating off the ground—it had no feet. The “man” was dressed in dark blue jeans and a dark brown hoodie embellished with yellow-gold symbols that looked like college fraternity Greek letters. It had no hands, either.

As he passed by, the figure raised its head as if to look back at him—but there was no face, just empty blackness. Even stranger was that the right shoulder of the figure was flipping back and forth at an incredible speed. “If you take your hand and flip it back and forth as fast as you can—it was even faster than that,” Chris said. “My hand doesn’t even go that quick.” Not to mention how difficult it is to flip a shoulder!

Another semi was behind Chris, and he jumped on his CB radio to ask the driver if he saw the figure, too—but the drive said no, he saw nothing on the shoulder.

Chris, a frequent experiencer of the paranormal, has encountered many weird things, but the faceless, vibrating hoodie man unnerved him so much that he had to call his best friend working night shift at a gas station and tell him about it—he needed to hear a calm, relaxing voice.

Two weeks later, on the same run, and at almost the exact same spot, Chris saw what appeared to be a shadow person stepping into the road. It had one arm raised up, and Chris could see straight through the entity’s mouth.

I asked Chris is there was any possibility that the figure could have been a college frat student, perhaps out on a lark. Did he only seem to have no face, perhaps because of a trick of light and shadow?

“There was no way that was a solid person standing up to the side of the road,” said Chris. “No feet, no hands, and just darkness for the face. It was very creepy.”

Perhaps the flipping shoulder was a symptom of something that was from another dimension, and was not completely materialized in ours. I have long thought that entities, aliens, and mysterious creatures and beings are interdimensional visitors.

What’s going on in Ohio?

Chris’s story reminded me of another account I recently published, “The Phantom Running Man of I-675 Ohio,” in which a hooded man with no face or hands suddenly appeared beside a car and paced it effortlessly. That account is posted in the Paranormal section of my website: click here.

Mystery roadside figures occur everywhere. What is it about Ohio that the phenomenon favors a male in a hoodie with no face, hands, or feet?

If you have had an encounter with a hoodie man, please write to me at reguiley@gmail.com.